“Symposium on China’s Legal Regulation of the Internet Intermediaries” was held in New World Beijing Hotel on the afternoon of February 26th, 2017. The aim of the conference was to strike a balance between the interests of right holders, investors, and consumers in the legal regulation of the internet intermediaries. The conference was co-hosted by University of Chinese Academy of Sciences and Bournemouth University, as the achievement dissemination conference of the collaborative research project applied to AHRC by the both sides, as well as an academic symposium. Despite the team members from both sides, the conference appealed more than 60 participants including experts, scholars, representatives and postgraduates from NCAC, Trademark Review Association of the National Trademark Office, Beijing Intellectual Property Court, Korean Intellectual Property Office, CAS, CASS, Alibaba Group, Jingdong Group, Tencent Group, etc.

Associate Prof. Luo Xianjue from School of Public Policy & Management, UCAS hosted the opening ceremony, and greetings were given by Prof. Lishunde, Dean of Department of Law and Intellectual Property, UCAS, and Prof. Maurizio Borghi, Director of the Centre of Policy and Management of Intellectual Property, Bournemouth University. The conference had two sessions. The first was the presentation of the research achievements by the project undertakers from the UK side, hosted by Prof. Li Shunde. Dr. Wei Lingling presented the background of the cooperative project. Research Fellow Marcella Favale introduced the laws and policies of the Regulation of Internet Intermediaries of EU. Prof. Maurizio Borghi and Dr. Wei Lingling jointly gave a report on “Comparative Analysis between Chinese and European Laws on the Regulation of Internet Intermediaries”. Dr. Fabian Homberg made a survey report on “Public Attitudes towards the Intellectual Property Issues of Internet Intermediaries”.

The second session of the conference was the dialogue of guests hosted by Prof. Maurizio Borghi. The dialogue included SONG Yushui, Vice President of Beijing Intellectual Property Court; YUAN Qi, Deputy Director of Trademark Review Association of the National Trademark Office; GAO Si, Deputy Inspector of Policy and Regulation Division of NCAC; GUO Biao, Chief Representative of IFPI China Area; NIE Dongming, Senior Expert of AliResearch, Alibaba Group; LIN Zhuo, Senior Director of Legal Affairs of Jingdong Group; SUN Na, Tecent Group, etc. The main topics of the conversation were the quantification of time limit of “notice + remove” safe harbor principle, the accuracy of “notice + remove”, and the possibility and development level of the replacement of AI to human evaluation under safe harbor principle. Such common senses were achieved that the duration of the removal should be regulated flexibly depending on the IP types of the right holders and the details of the case without a general solution; the accuracy of the removal could be basically assured during the practice; although technology had facilitated the enforcement of intellectual property, it still cannot replace human work facing complicated issues and data. The conference was heated in the Q&A session after the dialogue.

This symposium had not only promoted the academic communications of intellectual property circle between U.K. and China, but also deepened the mutual understanding among scholars, judicial and law enforcement departments and internet industry, and was a complete success. 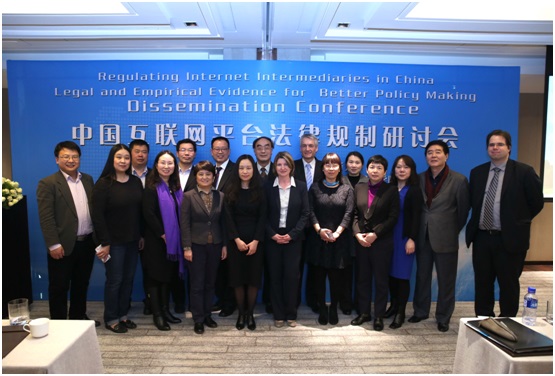